By Admin |  Media / Press, Press, Studies |  2014 máj. 23
NAIROBI, Kenya — In one of Kenya’s largest indigenous forest that lies west of Mount Kenya, two Indigenous communities that directly depend on the forest for their livelihoods are at loggerhead over land as impacts of climate change continues to bite. 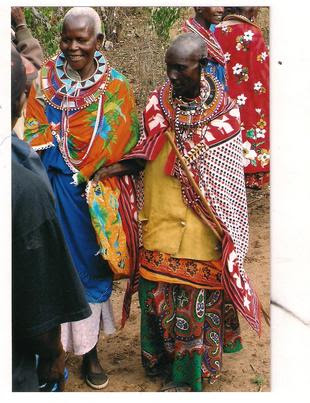 The yaaku indigenous people, a hunter and gatherer community that dwells in Mukogodo forest and who have coexisted with the indigenous Maasai community for centuries are headed for a collision course as perennial drought, dry rivers and grazing grounds get scarce day by day.

The Mukogodo forest is traditionally home to the Yaaku people who’re fighting for recognition of their identity and control over their territory. But the devastating impacts of climate change is threatening to tore apart the good relationship with their pastoralist neighbours the Maasais’ as scramble for resources intensifies.

The recent subsequent drought and determination by the Yaaku people to revive their lost language and protect their territory has brought tension in the area. The Maasai community view the move as a wider scheme meant to block them from accessing the forest.

Over the years the Maasais’ have grazed their herd in the Yaaku territory without sparking any controversy, but the recent mapping of the forest by the yaaku people in a move aimed at protecting and conserving the forest has ignited fresh feuds that threatens the survival of these two indigenous communities.

The yaaku people, a Cushitic speaking tribe and a hunter gatherer that inhabits in this forest has lost its language through assimilation by the Maasais’ and few hardly speak the language. Though various initiatives have been launched in recent years to revive this language, still very few people can fluently speak the language which is at the brink of extinction.

The language is subject to a study by the United Nations Educational, Scientific and Cultural Organisation (UNESCO) as an endangered language on the verge of extinction and only a handful of people speak Yaaku, while the rest speak Maasai as their first language.

With a population of 5000, and occupying a paltry 7 percent of the Mukogodo forest, it’s estimated that less than five people can speak yaaku language, perhaps the realisation that their language could become extinct and in the event lose their ancestral land; the community is reviving the language to restore their lost identity.

But their quest for autonomy has been met by stiff opposition from the Maasais’ and elicited controversy over boundaries.

At the centre of controversy are Mukogodo and Makurian plains, which the community claim is their ancestral land.

“We inherited these lands from our grandfathers and it would be unfair to lose it to the Maasais’ like we have lost our identity and language,” asserted Daniel Kimalel, Yaaku’s branch secretary and a member of the dispute resolution committee.

Jennifer Koinante, the director of Yaaku peoples association, a movement formed to champion the rights of these indigenous people says the only way to reclaim their ancestral land is through first restoring their identity and language.

Though there have been concerted efforts in protecting the forest, Koinante points out that deforestation, drought, overgrazing and agricultural expansion are quickly reducing the rich biodiversity in the forest.

She noted with concern that there has been a trend towards ignoring the need for biodiversity conservation of traditional knowledge systems and abilities of traditional herbalist and called on the government to ensure the forests biodiversity is protected and conserved.

Koinante attributed the rapid decline of biodiversity to the high demand of herbal medicine due to commercialization and globalization of herbal wealth. This she said had led to reduced availability of valuable plant species.

“Important species of medicinal plants in many parts of the forest have become endangered due to their premature and over harvesting by collectors and traders for commercial purposes,” she noted, adding that the unsustainable harvesting practices by herb gatherers often for commercial purposes have resulted in the depletion of many medicinal species in the Mukogodo forests.

Koinante, who has been in the forefront advocating for the rights of this community, says the shift from subsistence to a commercial focus in harvesting which is accompanied by a lengthy marketing chain that offers very low rates of return to gatherers has led to depletion of plant species that have medicinal value.

The poor rates offered to the gatherers, she says has forced gatherers to harvest large volumes of these plants in order to increase the levels of income generated, this has resulted in the near extinction of these species.

The community’s tribulations stems back in 1930’s when they decided to relinquish their language to that of Maasai whose culture they perceived to be superior. At that time they were in good contact with the Maasai community, but as the devastating effects of climate change takes toll on their livelihoods the community has embarked on protecting their land and reviving their lost language.

In 1937 the government designated the Mukogodo a protected forest, which in turn led to their eventual relocation into villages and their transition toward a more pastoral lifestyle similar to that of the Maasai.

Since then, the community has abandoned most of their culture, tradition and language to that of the Maasai people. Though there are no distinctive features between the Yaaku and the Maasai, the latter are pastoralist and nilotics while the Yaaku are Cushitic and hunter gatherers.

Although the Mukogodo forest is a protected area, the small number of remaining Yaaku people continues to have direct and unrestricted access to the forest and its resources.